The future is coming fast for the start-up football program at Wilson Preparatory Academy but the present looks good for the Tigers of head coach  Phillip Dickens and his staff.

Wilson Prep wrapped up the second week of summer workouts Friday morning with weight training, sprints in the gym and Bojangles biscuits. Dickens, who has 10 assistants in place already, said there have been more than 30 players present at the summer workouts, an encouraging sign for a program that didn’t even have a coach until last month.

Dickens, who had been an assistant coach on the staff at Wake Forest High under four-time state championship head coach Reggie Lucas, actually was the first girls basketball coach at Wilson Prep in 2015-16 when its athletic program was still at the middle school level only. While Dickens acknowledged that Wilson Prep had already developed a winning culture mainly through its basketball programs, he insisted that Wilson Prep will also be a “football school” under his watch. But building that culture from the ground up is his first job while also teaching the fundamentals of the sport to the players, even the more experienced ones.

“The biggest thing is getting the coaches to buy into the culture,” Dickens said. “At Wake Forest, we were very structured. Coach Reggie Lucas, I learned a lot from him. The main thing that I learned was focus. We dressed alike, we did everything alike and everything was structure and that’s what I want to bring here. And that’s the first thing that I’m imparting to the kids and to coaches is structure because it’s so important and football is going to take care of itself once that happens. Once the buzz got in the air about football here and with me coming, we’ve drawn a lot of interest from a lot of people but more importantly, the kids here in the school are excited and even though we’re basketball-dominated school right now, everybody is excited about football and so it’s been pretty good.”

The Tigers wrapped up their second week of workouts with three morning sessions after spending the first two days in the searing heat. Dickens said that conditioning wasn’t a problem but the players are behind on weight-lifting, obviously, since he has been there for just a little over a month. However, Wilson Prep has a weight room in place, for which Dickens thanked WPA founder and head of school Daryl Woodard.

“The goal here is to come in and win early,” Dickens said. “We are behind and one thing that I always stress to the coaches, the teams that we’re going to play in the Tar-River, they’ve been lifting weights to three years and we’ve got a lot of kids who are just getting introduced to weights. Talent-wise,  I think we’ll be one of the most talented teams in the conference, but strength matters when it comes to football. It’s getting the kids to fall in love with lifting and once their bodies start to change and they start to see the effects on the field that translate over, and then the program takes off from there.

“One of the main things I wanted to focus on coming in was the weight room and Mr. Woodard has definitely given me the resources to build the weight rooms.”

Dickens, who will serve as his own offensive coordinator, said he plans to implement the same Delaware edition of the wing-T offense that Wake Forest runs.

“I think is great for our situation because you’re able to get by with undersized linemen,” he said.

With a lot of athletes at his disposal, including at quarterback, Dickens said the key is to give them room to maneuver and make things happen.

“But my bread and butter will be the wing-T,” he said. “I feel it’s impossible to stop. You can slow it down, but you can’t stop it if it’s run well.”

“I think we’re going to run more of a 4-3, 4-4 look because of the athletes we’ve got,” he said. “We’re going to be super fast from sideline to sideline.”

Wilson Prep has a schedule in place, minus one nonconference game that Dickens still hopes to fill for the last week of August. Otherwise, the Tigers will be playing nine games against 1-A Tar-Roanoke Athletic Conference opponents, including the first game in school history on Sept. 2 at Warren County. The Tigers then have an open week before playing at North Edgecombe on Sept. 16. The first home game will be Friday, Sept. 23, against Northwest Halifax. Wilson Prep is only playing three home games out of the nine currently scheduled, including Oct. 7  against KIPP Pride and Oct. 21 against Rocky Mount Prep. Road games are also set for Weldon on Sept. 30, Northampton County on Oct. 14 and Southeast Halifax on Oct. 28.

“Warren County is my main focus right now,” assured Dickens when asked what he knew about the rest of the TRAC teams.

Dickens said that he keeps harping on a sense of urgency for the Tigers given the ground that they still need to make up before practice begins for real Aug. 1.

“We’ve had a lot of kids to come out and a lot of talent and it’s starting to feel like football,” he said. “I feel very confident about where we will be at that time. You know, it’s just bringing the guys along. We’re up to now about 30 to 33 kids. My goal was 40. … And with that, jumping into the fire in what I keep reminding my coaches is varsity football. It’s not rec league, it’s not AAU, it’s varsity football and even at the 1-A level, it’s still good football. And you know, a lot of great teams come out of 1-A but I feel very good about the season. But again, we are behind so there’s a state of urgency here. A lot of teams have spring ball and we didn’t.” 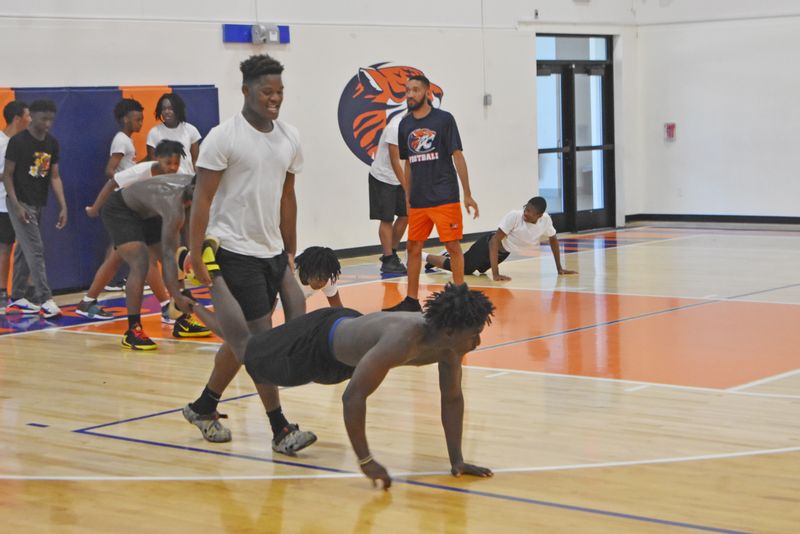 Prospective Wilson Prep football players engage in a drill during Friday’s summer workout session that began outside and ended in the school gym. Paul Durham | Times 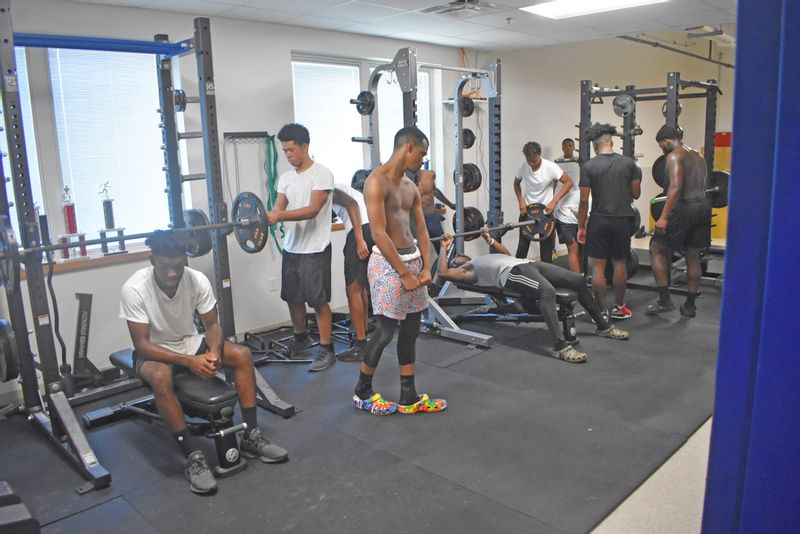 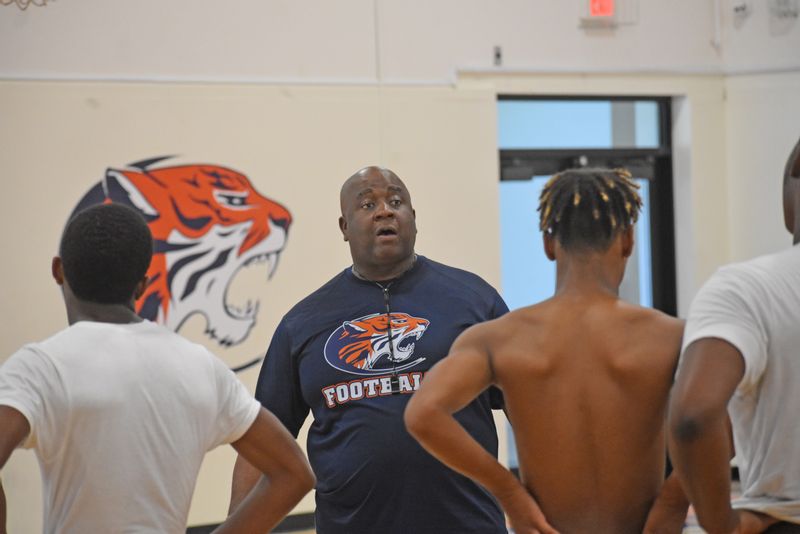