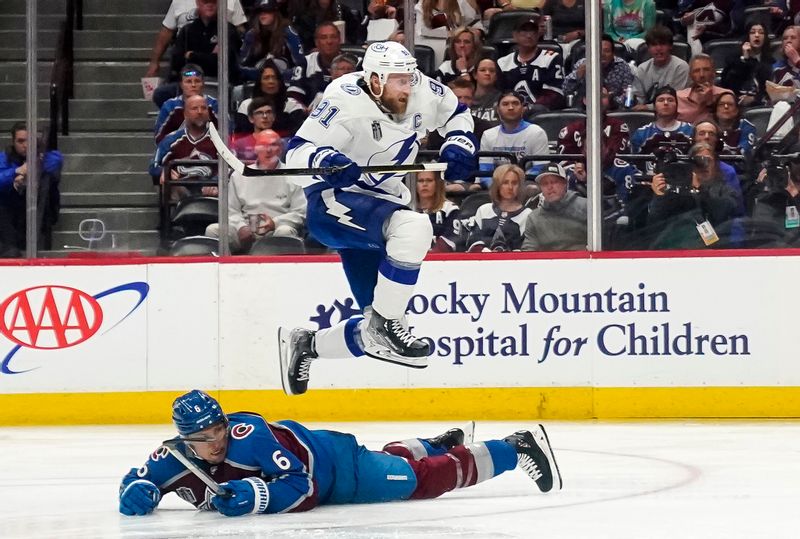 DENVER — Minutes after losing Game 1 of the Stanley Cup Final in overtime, Patrick Maroon scoffed at the idea that it was some sort of gut punch to the Tampa Bay Lightning.

“Two really good teams going at it,” he said. “That’s Game 1. We just got to refocus and be ready for Game 2.”

Few teams in recent NHL history are better at doing that, which is why the Lightning are unfazed about trailing the Colorado Avalanche. The two-time defending champions have won 11 consecutive series since their remarkable postseason run began in 2020; in five of them, Tampa has lost the opener — including twice this postseason — and the experience has steeled them for situations just like this.

“It’s not about riding the wave of one game,” coach Jon Cooper said Thursday. “It’s kind of about getting our feet under us. It’s understanding we’re playing a different team. We can’t win the series all in one game, and (players have) been really good at that.”

Players wasted no time in moving on to Game 2 on Saturday night. Tampa Bay, after all, had roared back from a 3-1 first-period deficit to tie the opener before Andre Burakovsky’s overtime winner. Elements from successful stretches of Game 1 can factor into the team’s tweaks and changes moving forward.

“We’ve done a great job of making adjustments after losses, so we’ll look to do that,” captain Steven Stamkos said. “The mindset is we’re here to win a series and you don’t know when that’s going to come: four games, five, six, seven. You never know.”

The Lightning have over the past three postseasons won series in all those combinations. But it wasn’t long ago that they were on the wrong side of a stunning defeat.

It’s hard to forget Tampa Bay getting swept in the first round by Columbus in 2019 after steamrolling the rest of the league all season and winning the Presidents’ Trophy with the best overall record. The adjustments, absent any panic moves like firing Cooper or breaking up the core, paved the way for this run.

The memory of that series and the 11 since that ended with them on the smiling side of the handshake line combines to give the Lightning the perspective they have today.

“That’s the great thing about our group: There aren’t many situations that we haven’t been in,” longtime winger Alex Killorn said. “It feels like we’ve seen it all. We’re not worried. We’re confident going forward. But there’s definitely a lot more work to be done.”

That includes trying to figure out how to slow down the speedy Avalanche, who want to turn games into track meets and use their offensive talent to pump in goals. Despite not getting past the second round the past four years, Colorado also has plenty of playoff experience and knows to expect a major pushback from the champs in Game 2.

Coach Jared Bednar believes the best way to handle that is for his team to keep playing its style.

“Regardless of how Tampa plays, we have a certain identity that we need to play to to be successful,” Bednar said. “We’ve learned that during the course of this season, especially. And then for me, it’s just managing those momentum swings.”

Tampa Bay is the first team since Wayne Gretzky’s Edmonton Oilers in the mid-1980s to reach the final three years in a row and is four victories away from the league’s first three-peat since the New York Islanders dynasty of the early ’80s. Cooper has managed to keep his players’ emotions in check so much that defenseman Mikhail Sergachev called the 1-0 deficit “the usual stuff.”

As unusual as it was for Tampa Bay to fall behind 2-0 last round against the New York Rangers, the Avalanche present a different challenge behind their high-end talent. While the Lightning will need to improve their play, most notably how they start, their mentality is now their biggest advantage.

“That’s taken some time for us to kind of fall into that mindset, but we’ve really developed that over the years,” Cooper said. “Hopefully one more series we can carry that through and take another step forward.”